Greetings and welcome to the Mabon Tarot Blog Hop!

Depending on which way you are reading around the Master List, you may have arrived from Andy Boroveshengra or in reverse from Aisling at TarotWitchery. I am so happy to welcome you to Wynn Tarot.

Mabon is the festival of the Autumn Equinox, occurring between Lammas (beginning of August) and Samhain (end of October) and celebrates Day and Night being of equal length. After which the nights grow long and we prepare for the coming of Winter.

Our wonderful wrangler for the Hop is Cristiana C Gaudet and the theme for this Mabon festival is Divination and Myth. As you can see by the tabs on this blog, I have a love of the Festivals and of myth and legend so am thrilled to be taking part in my very first Blog Hop. 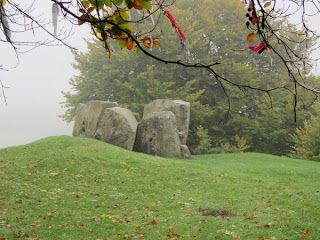 I live in Kent in the South East of England, and the above photo shows the nearby Coldrum Longbarrow all shrouded in Autumnal mist. This 3000 year old chamber reminds me that the land on which I live contains a wealth of ancient memories and didn't just appear as 21st Century suburbia!

Where our home lies is slap bang in the middle of an area once shared (not always peacefully) by Jutes, Saxons and Celts. At one time our very garden was part of the land owned by a Saxon general and was covered in woodland of Beech and Oak before gently sloping down to the River Medway.

According to ancient texts (including the Lacnunga - an Anglo Saxon book of healing charms and remedies) dense woodland was both a help and a hindrance to the population. Wonderful for a ready source of timber for shelter and fuel, but problematic due to the Elves. Yes....Elves! 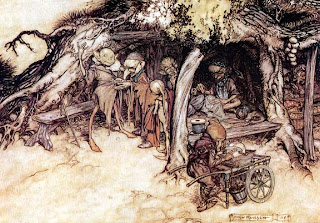 These dwellers of the dark forests were thought to be the cause of certain illnesses, wild behaviour in humans and livestock as well as nightmares and addled minds. Many historians claim that the probable diseases were due to damp, mould and airborne germs ('elf-shots') - but these were superstitious folk who believed they were sharing the land with the Elves, and that offerings and respect were required. In my own family, whenever we grew fruit and vegetables we were told never to strip a plant bare, but to leave some fruit 'for the fairies' (....and I still do)

When relations between human and Elf were good, the people would be invited to one of the dance rituals the Elves loved. It wasn't unheard of for some Elves to emerge from the woods and come and live underneath a human home (apparently the tidier the better. No chance here then!) and there are many tales of love and marriage between the two. Elves would sometimes bestow a gift of an Elf Book, which showed various magical ways of divining the future.


Our ancestors and their Elf neighbours needed to live in harmony with the wheel of the year, and moving from light to dark marked a shift in daily living. I have created a Tarot/Oracle spread to journey from this festival of Mabon towards the festival of Samhain at the end of October. I'd like to share it with you....and the Elves! 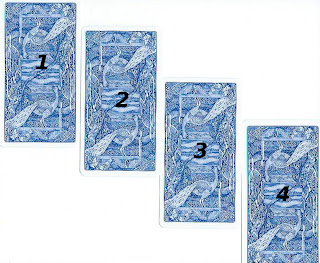 3 The strength I didn't know I possessed
4 What I bring to the dance!

Wishing you bright blessing through this Mabon Blog Hop - I shall now venture into my rain-lashed garden with my offerings .......and sit....and listen.... 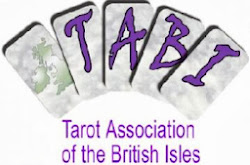